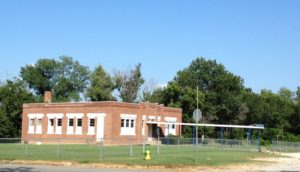 I started first grade at Riverside Grade School, only four rooms for four grades—1st through 4th. I have sweet memories of Riverside school. Only one block from my home, it was a red brick square building, with a nice playground. We played on teeter-totters, swings, slides, and the merry-go-round. We had our share of falls and spills off them all, but I don’t remember anyone being seriously hurt.

In the fall of third grade, we had a big production play which we combined with Hall Halsell grade school and performed it in the auditorium. We dressed as pilgrims or Indians, to put on our play. At our own school, we made our costumes. Mine was made out of brown paper grocery sacks. The sack had holes cut for the arms and head, and it was colored to look like an Indian dress with fringe cut at the hem. A paper headband with a paper feather finished the costume.

We made papoose carriers out of cardboard, with straps to put it on our back, and colored a paper sack which was stapled over the cardboard. I don’t remember the baby, but it must have been our own doll from home.

When time came to put on our play, I was proud to march around the auditorium, wearing my Indian costume and baby doll papoose on my back. We sang our songs about the pilgrims and Indians and Thanksgiving and recited our pieces as trained. We learned our stories of Christopher Columbus, the Mayflower, the Pilgrims, and the kind Indians who helped them live through the harsh winters of those first years in America.

“The grass withers and the flowers fall, but the word of our God endures forever.” Isaiah 40:8

Try as they may, the word of God can’t be proven false.