Lavon went to be with the Lord on 3-24-2020.  We will keep this website and the articles she wrote available in remembrance of her.   Michael Lewis 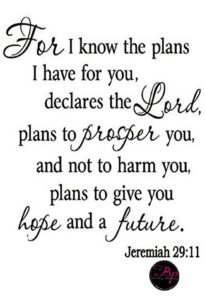 After all those years of working outside the home, sometimes I feel like I never want to leave my house again. I started working as a waitress when I was 15 years old. In 2003, I retired from the phone company after 32 years and, after a year off, I started my own computer consulting business, which I worked for 10 years, then took care of my mother until she moved to heaven in 2016 at age of 98.

Last week when the weatherman forecast a dusting of snow, I was so thrilled. Yes! Please God! Let it snow, and I’ll hibernate, cook stew, sit in my recliner, and knit. Then it occurred to me that while I was praying to be snowed in so I would have an excuse not to leave the house, others were praying God would hold off the snow so the roads would be clear for driving.

One prays the rain doesn’t come so they can go sunbathing at the lake, while the farmer prays for rain.

We pray for healing for one who’s in the hospital while she is praying for God to take her on home.

Who does God hear? Which prayer does He answer?

God hears and answers all our prayers and his answers are always the right answer for us. God is bigger than our prayers because He sees the big picture. He knows what is ahead.

“For I know the plans I have for you,” declares the Lord, “plans to prosper you and not to harm you, plans to give you hope and a future. Then you will call upon me and come and pray to me and I will listen to you. You will seek me and find me when you seek me with all your heart.” Jeremiah 29:11-13 NIV.

God’s plan is perfect. Just keep praying and He will keep answering. Keep seeking Him with all your heart and you will find Him. 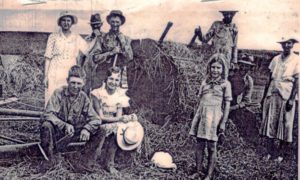 My Aunt Rosa Mae passed away recently. She used to talk a lot about the old days when all 8 kids were at home on the small farm in the 1930s. An idyllic life, going to school and going to church, working the farm. Running those hills. Setting rabbit traps for rabbit stew for supper. Picking persimmons, apples, pears.

Her daddy who they called Poppie worked in the hay fields and as his children started growing up, he started his own haying crew. Each child had a job. Mommie and the babies brought them lunch and water. It was a true family business.

At the end of hay season, Poppie took the family to town, went into First National Bank to pay off his loan, and then took the kids to each get new shoes for school.

Poppie Ela Swift had come to Jesus as an adult man. In about 1910, he had come into Bluejacket, Oklahoma, from Warsaw, Mo., and found work during hay season working with a crew of local men. He had his eye on Miss Gertie but she wouldn’t “court” anyone who wasn’t a Christian.

One day in the hay field the men were talking about the revival going on at the Kelso school building, about how good God was, and that God was healing people. Ela said, “If your God is so good, do you think He would heal me?” They gathered around him and prayed for him, and the Lord Jesus healed him. That night he went to the revival meeting at the Kelso school and gave His heart to the Lord.

Ela lived to be 93 years old. All his life he loved to talk about what God had done for him. The people at church loved to hear Brother Swift testify because he usually got happy and started dancing a jig. The family story was that Poppie would preach & testify to a fence post if there was no one around.

“Train up a child in the way he should go [teaching him to seek God’s wisdom and will for his abilities and talents], Even when he is old he will not depart from it.” Proverbs 22:6 Amplified Bible.

Poppie Ela Swift raised 8 kids to serve the Lord. A few came back to the Lord in their old age. I hope that gives you hope for your children.

One of my New Year’s Resolutions is to simplify. Same resolution for 10 years. Lately I have been trying really hard to get rid of stuff. It is an ongoing battle, a struggle to keep what is necessary and let go of things that I don’t need, I don’t love, don’t fit, that don’t make me smile when I look at them.

I have a closet full of clothes, drawers full of stuff, cabinets full, pantry full, linen closet full. I have books and magazines everywhere, in bookshelves, in the bathroom, on the coffee table. I have 5 sets of dishes, 3 sets still packed away from our move 16 years ago.

I decluttered my clothes closet last year. When I unpacked my winter things this fall, most don’t fit, some never did. Most are outdated and a few in need of repair. The struggle right now in the dead of winter is to mix and match the clothes I can wear so I can make it through this season without spending money on clothes. Now that I’ve lost weight I really need to buy clothes, but my closet is full. And a woman must have shoes. I have lots of shoes, some of which don’t fit and never have but “aren’t these so cute?” Some of them need to be discarded but “I might wear them in the garden next spring.”

Jesus said, “Take heed and beware of covetousness, for one’s life does not consist in the abundance of things he possesses.” Luke 12:!5 NKJV

My possessions do not determine who I am. My life is more than what name brand of clothing I wear and the designer purse I carry. Have you ever thought that maybe hoarding stuff is a form of greed or covetousness? Yes, that was a staggering thought to me too. I guess it is time to start giving more of it away.

No wonder Jesus said it is more blessed to give than to receive. Acts 20:35

Jesus was born as a real, live, breathing, flesh-and-blood baby. Mary had to change His diaper. He learned to push up, then roll over, sit up, stand, then walk just like any other baby.

He went to school in the synagogue, and learned to read and write from the scribes. He faithfully attended synagogue and worshiped Jehovah God of the Israelites, the One Who was His Father. He went up with his parents to Jerusalem to sacrifice and worship when He was 12, as was the custom of that day, and discussed the Torah with the doctors of religion where He shocked them by His grasp of Biblical concepts and memory of scriptures.

Jesus was different from anyone who had been born before. He did not have the original sin of Adam residing in his body, since He was born of a virgin mother by the power of the Holy Spirit of God, with no earthly father to transfer the original sin to Him.

All other people are born with the original sin of Adam in our bodies, passed down from our fathers. At a certain point in our life, called by some the age of accountability, we recognize the difference between right and wrong, and inevitably we sin and fall just as Adam and Eve did.

Jesus laid aside all His glory in Heaven and was born on earth as a man.

Philippians 2:5 NIV, “Your attitude should be the same as that of Christ Jesus: Who, being in very nature God, did not consider equality with God something to be grasped, but made Himself nothing, taking the very nature of a servant, being made in human likeness and being found in appearance as a man He humbled Himself and became obedient to death, even death on a cross.”

God became man, Jesus Christ, so that all men by His death and resurrection could be reconciled to God.

This is the real Christmas story, the greatest story ever told.

I’m sure all Mary wanted was to be left alone, so she could rest after the birth. She sure wasn’t ready for any company, much less strangers.
However not long after she gave birth and wrapped the baby in the special clothing she had brought with her, the shepherds came looking for the baby that the angels had told them about. Shepherds lived with their sheep night and day, never shaved, seldom bathed. They were a rude, crude bunch of men. And they were wanting to see her baby.

Can you imagine what it must have been like for Mary, a teenager, to give birth without her mother or other women relatives, with only Joseph to help her, in the unclean surroundings of a barn? When the time came for the baby to be born, they were far from home, in Bethlehem.

The miracle of Jesus’ birth has been told again and again, but it never grows old. The angel Gabriel announced it to Mary, the lowly little virgin girl, probably no more than 13 or 14 years old, telling her that the holy Child born to her would be the Son of God. The angel Gabriel said that Mary would “bring forth a son and shall call His name Jesus. He shall be great and shall be called the Son of the Highest.” Luke 1:31

An angel told Joseph, her betrothed, in a dream to take Mary as his wife, because the Child she was carrying was the Son of God. That could only mean  one thing to Joseph, a Jewish man: this baby would be Messiah, the Christ. Then the shepherds told Mary and Joseph about the angels who had appeared to announce Jesus’ birth. In turn, Mary and Joseph had a story to tell the shepherd of angels. Because she knew this Child was Messiah, Mary willingly shared Jesus from the moment of His birth, even with the most lowly workmen of society in those days, the shepherds.

Baby Jesus was not hers to keep. He had come for the whole world.