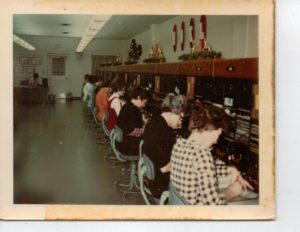 In 1984 I transferred to a job in the dial office, as an electronics technician working on electro-mechanical equipment that had been installed in 1958. In 1995, the phone company started upgrading the whole state to digital phone systems, replacing the electro-mechanical offices with computerized or digital offices. After my home office was upgraded, I was placed on a traveling crew, going all over the state, until the last offices in Weleetka and Wetumka, Oklahoma, were replaced.

When I retired in 2003 after 32 years of service, I became an active member of the Telephone Pioneers, now serving as secretary and attending most monthly meetings. We are a service organization, serving the communities together as a club, and as individual volunteers.

I have noticed over the years that the retirees who have the best retirement are the ones who had a “life” outside the phone company, the ones who kept up an active life after they retired.

We enjoy reminiscing about how things were in the “good ol’ days,” but we live in the here-and-now.  If changes are going to be made in our community, our state, our nation, our world, it must come from those who are forward-looking, not sitting back, retired from the world. It’s okay to fondly remember, but don’t try to live in the past.

True pioneers don’t just sit around dreaming of the past; they press on into the future. 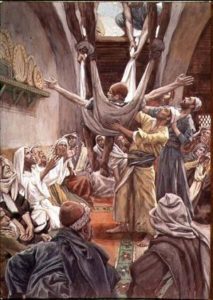 Don’t you just love that story in the Bible about the men who carried their crippled friend up on the rooftop? Then they tore off the roof and let him down on his bed to where Jesus was.

What were they thinking? Were they crazy to pull a stunt like that? Where did they ever come up with that idea? I wouldn’t have thought about doing it that way, would you? What if they had dropped him? He could have died or been crippled even worse. But there was a crowd around Jesus and there was no other way to get him in.

“And when he saw their faith, he said unto him, Man, thy sins are forgiven thee. Arise, and take up thy couch, and go into thine house. And immediately he rose up before them, and took up that whereon he lay, and departed to his own house, glorifying God. And they were all amazed, and they glorified God, and were filled with fear, saying, We have seen strange things to day. Luke 5:20, 24-26.

Yes, it was strange to see. Jesus saw the faith of the man’s friends. They had faith that told them if they could just get this man to Jesus, he would be healed. Faith causes people to go out of their way to do something unheard of or in this case, never thought of before, unprecedented. Faith
says, if we can just get him to Jesus, all will be well.

Are you a friend like that? Do you love your friend so much that you will go to all that trouble to get him to Jesus? Are you willing to lay down your life for your friend by spending time in prayer for her?

“Greater love hath no man than this, that a man lay down his life for his friends.” John 15:13.

Everyone needs a few crazy friends like that, don’t they?

WATER OFF A DUCK’S BACK 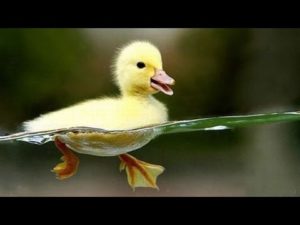 Mama used to raise chickens and ducks. Oh, I loved those little babies in the incubator in the warm winter kitchen. The little ducks would flop around in the water, knowing instinctively that they should be swimming, while the baby chicks would do all they could to get away from the water, except to drink a little drop now and then. Somehow those chicks knew water would kill them, because they were not created to swim. Chicken feathers get wet and stringy, while duck feathers shed the water.

What kills one lifts the other to his destiny. What wounds one heart until it cannot be healed rolls off another heart.

Instead of grieving over the troubles that come our way, the insults of those who don’t understand us, we can learn to face them head on and let them roll over us and down our backs and off us—like  water off a duck’s back. Those things can’t hurt us when we act that way

James 1:2 NKJV says, “My brethren, count it all joy when you fall into various trials.” The word ‘count’ is a mathematic term. So maybe it isn’t ‘joy’ when it happens, but we can count it as ‘joy.’ Act like it is and call it ‘joy.’

The very thing that was sent to drown us will lift us up by our “duck feathers” and float us to our destiny. The human reaction is to defend ourselves, argue, fight, complain about the injustices that life brings us, but the spiritual action is to rejoice.

Decide in advance that you are going to act, not react. If you have a plan of action in advance, when those trials come your way, you will instinctively do what you plan to do.

Let the trials of life float you to your destiny.

Years ago, I went to San Antonio to a telephone company school for 2 weeks. That weekend while I was there, several of the students who were from the area invited us who were from out of state to go downtown to The River.

We parked on the street, which was almost totally deserted and walked down the stairs to where shops and cafés lined the river on both sides. The river was packed with people, walking on the banks, shopping, and riding in flat-bottom boats on the river.

When I saw the famous “River,” I was astonished. “You call this a river? It’s no bigger than Bull Creek in Vinita, Oklahoma,” I told them. “I’ll bet I could wade across that river and it would never reach my waist. We have the Grand River in northeast Oklahoma, and what about the Mississippi River? Now those are rivers.” But of course, those San Antonians were proud of their river, as they should be, so no offense.

I remember lying on a quilt in the back of the stationwagon in the dark, listening to Daddy and Granddad talk in hushed voices while they fished off the bank of some river all night. It was probably Grand River, below the dam at Langley. Dad also loved to fish at Spavinaw below the dam and we camped there too.

There’s another river that I love to think about, but I’ve never been there. It’s been described several places by different people, but my favorite description is in Revelation.

“And he showed me a pure river of water of life, clear as crystal, proceeding from the throne of God and of the Lamb. . .. There shall be no night there: They need no lamp nor light of the sun, for the Lord God gives them light.” Revelation 22:1, 5 NKJV.

I can just imagine Daddy and Granddad sitting on the banks of the River of Life in heaven, pure and clear, fishing and enjoying their new life, but they won’t be fishing in the dark. No, the Lord Himself is the Light.

I’ve had aquariums off and on all my married life. My husband said one time, “I don’t know why you bother with an aquarium. The kids don’t even look at it.” I said, “But I’m not keeping an aquarium for the kids. I’m keeping it for me, because I love fish.”

Several times I have bought male bettas which don’t require an aquarium. They can live in a fishbowl on the window sill, but they must be kept in individual fishbowls. They swirl through the water, hiding and darting around the plastic plant, coming to the surface when I drop food in the water.

If one male betta catches sight of the other male betta in a nearby fishbowl, he ruffles up his fins to make himself look big and threatening. I try to keep them far enough apart so they can’t see each other, with the fish food container in between, but sometimes it just happens. Male bettas don’t get along with most other fish, especially each other, and not even the female betta.

Now neons on the other hand are compatible with almost every other tropical fish. They are small with a fluorescent stripe down their side and they run in gangs. If you see one, you will see them all, for the rest are right beside him. There is no discernible leader, just a bunch of followers all moving together.

Guppies are the flashy ones in the aquarium tank. They have long multicolored tails and float around near the top, showing off.

Another tropical fish frequently found in aquariums is the gourami, a fish that grows pretty large and is a predator.

We have had shrimp, frogs, crabs, and eels. They really stand out from the standard fish.

One of our favorites is the angelfish. Big, round, flat, with silver coloring and angel wings, they float gently through the water and reflect light. They get along with everyone.

Oh, and we love the goldfish, the one that can live under most any circumstances, in any old bowl or jar, as long as the water is changed once in a while and a pinch of food is dropped into the bowl now and then. But the goldfish will only grow as big as the bowl will allow.

Which fish are you?

“If it is possible, as much as depends on you, live peaceably with all men.”Romans 12:18 NKJV

We live our lives in a glass bowl. Let’s live in peace with our fellow bowl-mates and let our shiny souls reflect the light of Christ to all who see us.

Rahab was the woman of the house, a house of ill repute. When Joshua sent two men into the city of Jericho to scout it out, they were hid by Rahab, who saved their lives. In exchange, she asked for them to “show kindness to my father’s house and save alive my father and mother, my brothers and sisters, and all that they have and deliver us from death.” Joshua 2:12-13. She believed that their God is the God of heaven above and earth beneath.

So the scouts said, “Our lives for yours!” She should gather all her family and all they had into her house and hang a scarlet rope from the window as a sign.

Rahab said, “According to your words, so it is.” Joshua 2:21. Then, when the city was attacked, Rahab’s family was saved and she was accepted into the Israelites as one of them. According to the genealogy of Jesus, (Matthew 1) she was the mother of Boaz who married Ruth who was the grandmother of David the king of Israel and the ancestor of Jesus.

Redemption for the whole family! A woman obtained the salvation of her whole family, mother, father, brothers, sisters, and all that belong to them, including their children.

Rahab pleaded with the men of God for her family, just like many mothers and grandmothers have pleaded with God for the salvation of her children and grandchildren.

Just as God’s representatives pledged their lives to save Rahab’s family, Jesus has given us the promise that our families will be saved.

Paul and Silas were in jail, and the Lord sent an earthquake to open the prison doors. The jailer fell before Paul and Silas and said, “What must I do to be saved?” They replied, “Believe in the Lord Jesus, and you will be saved, you and your household.”

Are you believing God for the salvation of your family? Here are two examples from the Bible where whole families were saved. Don’t give up. Take God at His word just like Rahab did.

Say to the Lord, “According to your words, so it is.”